“Give Me Your Huddled Masses….”

Because of my preoccupation with turning 40 and racking my brains for yet another super, exciting lesson plan (yes, I’ve already tried several) that may finally cause my sophomores to turn into focused students who actually give a sh*t about something other than movies and games, I have not been as good about reading on the Syrian refugee situation and the recent terrorist attacks.

I’m not naïve, but I try to believe in the potential in most humans and that most humans have a basic decency—a basic humanity. It’s appalling to see people you know as normally generous turn into bigoted animals snarling over their territory. Fear causes weird and sometimes melodramatic reactions, but times like these call for logic and cool heads—not irrationality and fear mongering.

What finally pushed me to write is the following post (this is not an attack on Franklin Graham. I don’t even know him. He’s simply saying what too many others are agreeing with or saying themselves. I’m using him only because he was my last straw.): 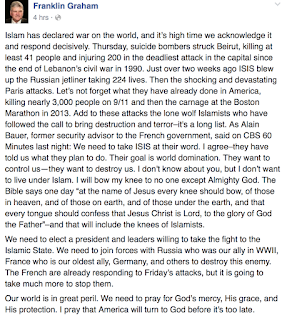 I have two simple responses to this. I refuse to over think it.

On the pedestal of the Statue of Liberty, is transcribed Emma Lazarus’ “The New Colossus.” The most famous lines are, “Give me your tired, your poor,/Your huddled masses yearning to breathe free,/The wretched refuse of your teeming shore./Send these, the homeless, tempest-tost to me,/I lift my lamp beside the golden door!" (http://www.libertystatepark.com/emma.htm).

The Statue of Liberty, arguably one of the most recognizable American symbols, used to stand as a literal beacon for the tired and poor, for those whose own countries treated them as “refuse,” for the homeless and “tempest-tost.” America is a country of immigrants. Unless you’re a “Native American” (they also immigrated at some point in history), someone in your family immigrated. Period. So why, once we’re a few generations removed from the old countries, do we become xenophobic? At what point do we become so America-centric we lose all sense of the humanity of others? Is it because we refuse to even recognize the humanity of our own citizens? Do we only believe in equality when it’s connected to hatred—we can equally hate ALL people not like us? Is it because we have no room for love for our own citizens, so how could we possibly scrape up a modicum of decency and compassion for people who don’t look or worship like us? Or, is it because we must fear reprisal from our own citizens for treating them like others, like animals; therefore, we would naturally fear citizens of other countries?

For my Bible-minded readers, I thought I would also pull something more recognizable: “The Parable of the Good Samaritan.” I’m Christian partly because it is familiar to me and partly because I truly appreciate Jesus’ teachings. Over the years, I’ve come to analyze the Bible with a more critical eye, but I can still rely on Jesus for logic and compassion. For those not familiar or who need reminding:
On one occasion an expert in the law stood up to test Jesus. “Teacher,” he asked, “what must I do to inherit eternal life?”
“What is written in the Law?” he replied. “How do you read it?”
He answered, “‘Love the Lord your God with all your heart and with all your soul and with all your strength and with all your mind’; and, ‘Love your neighbor as yourself.’”
“You have answered correctly,” Jesus replied. “Do this and you will live.”
But he wanted to justify himself, so he asked Jesus, “And who is my neighbor?”
In reply Jesus said: “A man was going down from Jerusalem to Jericho, when he was attacked by robbers. They stripped him of his clothes, beat him and went away, leaving him half dead. A priest happened to be going down the same road, and when he saw the man, he passed by on the other side. So too, a Levite, when he came to the place and saw him, passed by on the other side. But a Samaritan, as he traveled, came where the man was; and when he saw him, he took pity on him. He went to him and bandaged his wounds, pouring on oil and wine. Then he put the man on his own donkey, brought him to an inn and took care of him. The next day he took out two denarii and gave them to the innkeeper. ‘Look after him,’ he said, ‘and when I return, I will reimburse you for any extra expense you may have.’
“Which of these three do you think was a neighbor to the man who fell into the hands of robbers?”
The expert in the law replied, “The one who had mercy on him.”
Jesus told him, “Go and do likewise.” (Luke 10:25-37, New International Version
https://www.biblegateway.com/passage/?search=Luke+10%3A25-37)

I tell my students not to make assumptions about the reader’s understanding and not to expect the reader to make connections, so allow me to break it down for you. An “expert” of the law wants to test Jesus on the commandments, the way set for “eternal life.” Dude seems to be okay with loving God with his whole heart, but needs to phone a friend about the “love your neighbor” part. I’m probably reading too much into it, but I imagine the “expert” was hoping Jesus would define “neighbor” as only those who look and believe like the man. Isn’t that why we work to segregate our neighborhoods and schools? Isn’t that why people join those HOA’s? Definitely want my neighbors to have the same color roof and skin as I do. Then it’s way easier to love them.

Unfortunately, being a radical human being, Jesus drops some truth on that “expert” of Biblical law/scripture. Being an effective teacher, Jesus makes it as understandable as possible to avoid confusion and miscommunication: a man travels from point A to point B. Robbers accost him, then strip, beat, and leave him for dead. Wonder if the robbers left him with proper documentation to prove who he was?

The first person to pass by is a priest. Being a shining example of godly love, the priest crosses to the other side of the road. Next, a Levite (one of the Jewish tribes) passes by, sees the man, and also crosses to the other side. Now, Jesus does not state the beaten man’s race or religion, but two people who would know God’s law pass by the man. They even work to get as far away from the man as possible.

Last, Jesus says a Samaritan sees the man. He takes pity on the man, disinfects and bandages his wounds, puts the man on the Samaritan’s donkey, and takes the man to an inn—charging them to care for the man. The next day the Samaritan pays the innkeeper and states he will reimburse the innkeeper for any incurred expenses.

There are so many remarkable aspects to this story. Jewish people considered Samaritans as lower class since Samaritans intermarried with non-Jews and didn’t keep the law; however, the Samaritan didn’t stop to ask the man’s race or religion. He simply saw another human being in need and gave that human aid. Did the Samaritan fear the man was lying there as a trap for a larger plan? Did the Samaritan bemoan all the poor people not being cared for in his own town? Did the Samaritan worry the robbers might return and beat him or seek retribution for aiding their victim? No, he saw through the dirt and blood covering the man, saw someone stripped bare (literally and figuratively) and laid low by circumstances, saw someone who was robbed of his possessions and dignity—and that Samaritan showed love. Not hate, not fear, not anger. He gave unconditional love to his neighbor.

I am not an idealist. I do sometimes look for hopeful qualities in humanity. I know we live in a frightening world where people commit unspeakable acts toward each other. However, if I have to die over a choice I’ve made, I’d rather the reason be showing someone love. As someone who believes in a higher power and believes in a purpose larger than myself, I also have to believe in something larger than fear. That something is love.

And if your beliefs are not making you a better person, you’re doing it wrong.
Posted by Jennifer Williams at 12:17 AM